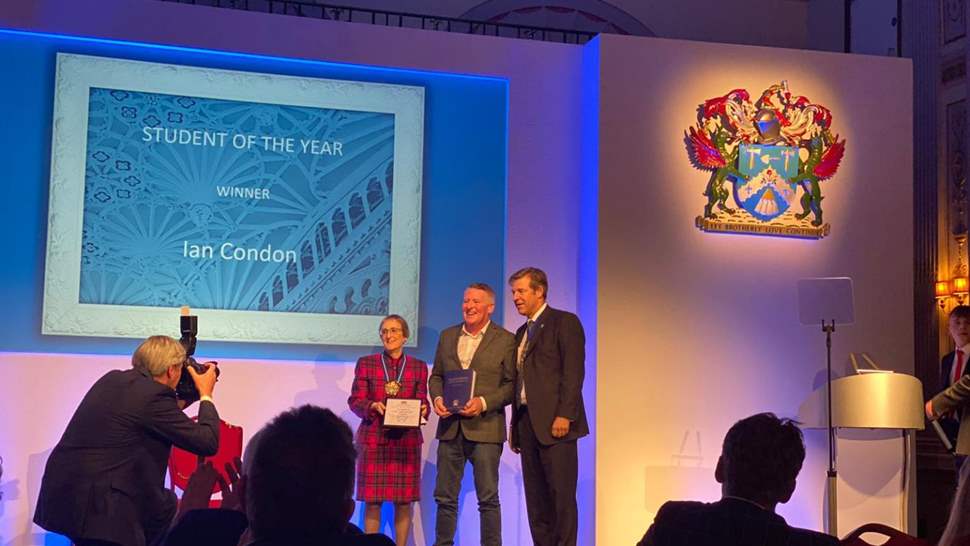 One of the Growth Company’s plastering students, Ian Condon, has been crowned the ‘Student of the Year’ at the Plaisterers’ Company Training Awards 2019. Now in their 9th year, the awards recognise excellence in the plastering industry.

However, Ian’s journey hasn’t been straightforward. He had a 10-month period of unemployment after being made redundant from his job in the printing industry. The financial struggles of being unemployed took their toll on his family life, and his marriage eventually broke down.

Despite his confidence and self-esteem being knocked, Ian decided that at 50 years of age, it was time to take on a new challenge. He chose to turn his hand to plastering, and he enrolled onto the Level 2 Diploma.

Ian was enthusiastic from the start and embraced new challenges and all development and learning opportunities offered to him throughout the course. Although experiencing his own personal difficulties and financial hardship, he was always on hand to support his younger peers throughout their learning journey.

He completed the diploma in plastering, and he was selected by British Gypsum (BG) for a place on the first ever piloted skim-only course – which he passed with flying colours. Getting the qualification so quickly meant that Ian could start looking for work, and he was successful in securing a role at Irlam-based Bluegyp, where he works skimming apartment blocks. Not only has he settled in well, but he’s also preparing to undertake an NVQ on site.

Ian was nominated for the Student of the Year Award by Mark Johnstone, his tutor at the Growth Company. He said: “Ian’s motivation, passion and commitment have shone through. He is an outstanding student whose resilience and courage have paid off. I feel very proud that he has won this award after being up against so many other skilled plasterers from across the country.”

The win came as a shock to Ian, but he says he is ‘very honoured and privileged to have won such a big award’. Speaking of his achievement, Ian said: “You’re never too old for a career change, which I have proven – I really feel like I’ve broken the mold in terms of not letting my age hold me back from pursuing something which interested me.

“I’m grateful to my tutor, Mark, as he was really supportive during my time learning with the Growth Company. He was full of knowledge, and it was a relaxed yet professional environment to learn in. I would recommend the Growth Company to anybody who wants to start a career in plastering.”

Congratulations Ian! We wish you all the best for the future.

If you would like to follow in Ian's footsteps and change your career, enrol onto one of our adult courses. Alternatively, if you're a business owner looking for ways to develop your workforce, find out how we can support your growth through a range of people development programmes.