Achieving his dream whilst on an Apprenticeship 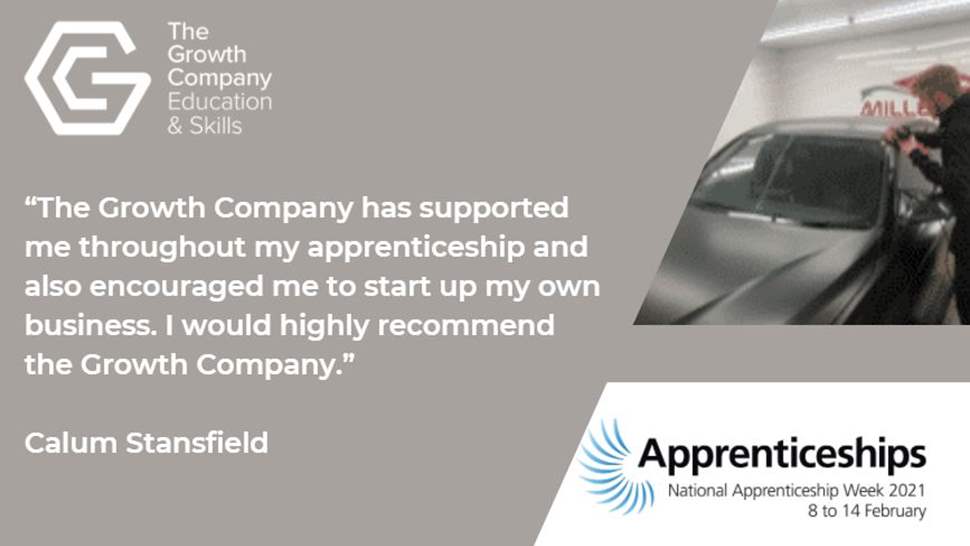 From a young age, Calum knew that he wanted to work in the motor vehicle industry, his dream was to one day run his own business.

During his first year as an apprentice, Calum faced some very personal challenges. With the support of his family and Skills Development Coach, Ged Leckey, they worked together during what was a very difficult time and Calum was able to carry on working towards his goal.

Whilst in his new placement Calum found that the vehicle wrapping side of operations, were few and far between and this is the part of his role that he enjoyed the most.

After discussions with Ged and his family who advised Calum to start thinking about and planning the setting up of his own business as he was building up a lot of bookings for vehicle wrapping that he would do in his spare time.

Calum left his placement and started to work at his dad’s garage, King Street Autos in Stockport whilst he was developing his own business using a unit at the back of his Dad's garage. This is where Millennium Customs began.

When asked about the support received, Calum said: “I have always had a keen interest in motor vehicle, from a young age I spent my time helping out my dad. I was aware that the Growth Company offered apprenticeships in Automotive so, I applied, and have never looked back. I am so grateful for the support that I have received – they supported me with finding a new placement and also encouraged me to start up my own business. I would highly recommend the Growth Company and, watch this space, as I am looking to take on an apprentice in the near future.”

If you are an employer who is considering recruiting an apprentice, you can get in touch with us by calling 0161 233 2656 or emailing us.

If you would like to talk to someone about an Automotive Apprenticeship you can call our Greater Manchester SkillCentre on 0161 876 3300 or email us.